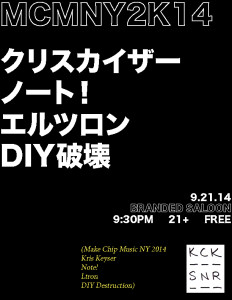 Back againnnn. Kick.Snare presents Make Chip Music New York 2K14! Come celebrate $UMMER with chip guys and gals from all em boroughs. Kris Keyser back again to wreck your shorts get you into sports. Note! coming at you – stitches out and ready to knife YOU with saw waves for days. L-tron: unapologetically ready to peel back your ear-lids and fill your brains with 20 year, whiskey-barrel-aged SICK ARPS. DIY Destruction will blind you with his hyper-accurate, protein-rich brain lasers. Join us for one of our favorite shows each year. It’s gonna be good. It’s gonna be free. It’s gonna be SUPER SWEET. Branded Saloon. 21+. 9:30pm-12:30am.

Kris Keyser mixes fury and fun with his low-bit compositions. Working primarily with the Nintendo Game Boy , Kris has wowed audiences in the NYC area for years with his energetic music and hyperactive live sets. Kris was a musical guest on the Engadget Show in 2010, and has played chipmusic scene institutions Pulsewave, I/O, 8static, PAX East, MAGFest, Toy Company Festival, and Blip Festival 2012.

Note!, the alias of Christophe Richard from Brooklyn, New York, explores music through a lo-bit aesthetic and aims to prove that even the simplest square waves and white noise can be textured and crafted to create something far greater than the sum of their parts. Oh and you can dance to it. But bring extra AA batteries, please.

Upon discovering what
the program was capable of,
the scientists took immediate percautions,
securing it inside of the nearest electronic
device they could find: A nintendo Game Boy.
They feared its power yet could not bring
themselves to destroy it. Trapped inside the machine
with no way to escape and return to its own time,
the program began expressing itself through
the sound chip of the Game Boy.

DIY_Destruction (Michael Goodman) has been doing visuals for the better part of 6 years using a circuit bent NES and custom Pure Data patches. Using now a Raspberry Pi with Super Pikix Pi. Originally from NY He has performed in Canada, Boston, England and numerous festivals such as PAX Prime, PAX East, MAG Fest and SuperByte 2013.